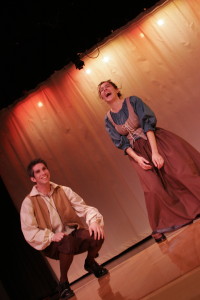 The Spanish Golden Age (the Siglo de Oro in Spanish) was a period of high artistic activity and achievement that lasted from about 1580 to 1680. During this time period, El Greco and Velázquez painted their masterpieces, and Cervantes wrote his famous, satirical novel Don Quixote. The theatre also enjoyed a golden age in acting and playwriting, producing plays to rival those of the Elizabethan and Jacobean dramatists who were writing at the same time.

Theatre historians used to claim that the plays from the Golden Age were too traditional and too concerned with a narrow code of honor to appeal to a wide audience, but recent scholarship has proven that the plays are as exciting, challenging, and relevant as the works of most English and French playwrights of the time period. In fact, the plots for many seventeenth-century English and French plays were taken from Spanish drama.

The most famous plays of the period are the philosophical drama Life Is a Dream by Calderón, the historical play Fuenteovejuna by Lope de Vega, and The Trickster of Seville (about the legendary lover, Don Juan) by Tirso de Molina. There are also great comedies, religious dramas, farces, and tragedies by these and other playwrights. Comedies by female playwrights (Sor Juana Inés de la Cruz, Ana Caro, María de Zayas, and Angela de Azevedo) have recently been discovered and translated, as well.

The three major forms of Golden Age theatre are the comedia, the auto sacramental, and the entremés. Autos sacramentales are one-act religious allegories, and entremeses are one-act farces originally performed between the acts of a full-length comedia. Comedias are three-act dramas written in verse, which mix comic and serious elements in complex plots that often emphasize intrigue, disguises, music, and swordplay.

This site uses Akismet to reduce spam. Learn how your comment data is processed.

Join or Renew Your Membership

Note if you plan to attend the 2021 Almagro Virtual Symposium you must be a current AHCT member before registering.

2021 Virtual Symposium: July 5-11
SUPPORT GRADUATE STUDENT
ATTENDANCE
You can help support graduate student attendance at the annual conference. Everett Hesse Conference Awards of up to $125 per student* come from your donations. Any amount is appreciated!

*Awards are determined by the Student Awards committee based on quality of paper submissions. The number of awards is contingent upon available funds.

Receive the AHCT Blog via Email!